Are Aphids Harmful to Humans? Aphids are little, tiny insects that feed on plants. These insects are also known as greenflies or plant lice.

Their bodies are soft and have the shape of a pear.

When it comes to color, aphids have a variety of them, normally they’re green, but they can be brown, yellow, red, purple, and more.

Aphids are members of the true bugs group.

There are more than 4.000 species, going from the smallest, 1mm aphid to the Giant Willow aphid, which grows up to 10mm.

Essentially, aphids can be found everywhere all around the world where there are plants near, also, they prefer more tropical temperatures.

As said before, aphids use plants as their source of food.

Basically, any plant can be attacked by aphids.

Some species of aphids are inclined to specific plants but, regularly, they have a wide range of plants they love to feed on.

If you want to learn more about aphids, then here are some more interesting facts.

Yes, as strange as it sounds, aphids’ poop is essentially sugar.

These little insects suck the sap out of the host plant.

They have to consume a lot of sap to meet their nutritional requirement since the sap they eat is mostly sugar.

So, they excrete a sugary droplet known as honeydew, that’s why you can see a sticky fluid on plants that are infested with aphids.

As I mentioned before, there are more than 4.000 species of aphids.

However, not all of them represent serious pests, only 250 of those species are highly dangerous for plants.

They have their own bodyguards

Aphids produce honeydew as a result of eating the sap from the plants.

But there are other little creatures who’s favorite meal is honeydew, ants.

In exchange for honeydew, ants protect aphids everywhere they go from other animals.

Aphids have a small body and eyes, big antennas, and a mouth that is designed to suck the sap from plants.

But they do not have wings and most of them have three pairs of legs.

Aphids give birth to replicas of their mothers

Aphids can produce offspring without males, this is a process called parthenogenesis.

Which females can give birth to babies without needing the presence of a male.

Once they give birth, they produce exact replicas of the mother, the babies are genetically the same as the mother.

There are times where aphids give birth to female aphids that never reach adulthood.

There’s a purpose behind this and it’s that these female aphids transform into soldiers instead.

Their job is to protect their mothers.

These soldiers are very committed to their jobs, they would even sacrifice their own lives to protect others from danger.

Also, they have distinct legs that are specially designed to squeeze and crush predators.

Rumor has it that aphids are very tasty and sweet to eat, that’s why there are so many predators who want to eat them. There can be hundreds or even thousands of aphids in one plant, which represents a huge opportunity for any animal that’s hungry and wants to eat a snack.

Once aphids have spotted danger, they use a pheromone, just like many insects.

They alarm others so they can run for cover.

However, lady beetles, a common predator of these insects, have learned how to replicate this defense mechanism.

And have used it on their own to lure aphids and eat them.

They don’t go down without a fight

Just because they’re small doesn’t mean they won’t fight back.

In fact, they’re not easy to take down.

Once they’re captured they use their hind legs to kick their enemies.

Depending on the species, aphids will have a different method to defend themselves.

Some aphids have body parts that are hard to chew, making it difficult for predators.

But the most interesting fact is that if everything else fails, aphids would stab the eggs of their enemies to kill them from inside.

As you can see, these little insects know how to fight.

There you have it!

These are some curious facts about aphids.

I bet they are more interesting than you thought for a little insect. 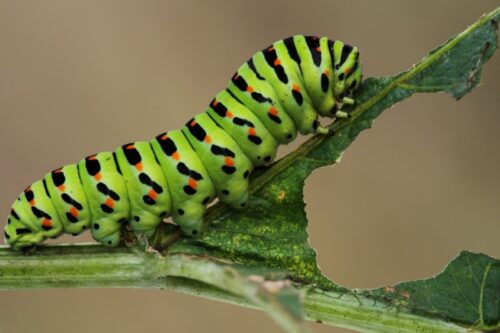